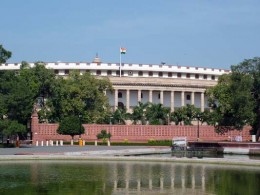 Delhi, the vibrant capital city of India and home to seventeen million people is the starting point for many India Wildlife Holidays tours. The city is a fascinating mix of old and new where ancient Mughul forts and medieval bazaars are dotted amongst the modern office blocks and shopping malls. There is more than enough to keep visitors interested for a few days and all our tours that visit Delhi include a full day guided sightseeing with an expert local guide.

Fought over by various civilisations over the millennia, Delhi has a living history, with the relics of these many invaders and their religions telling a fascinating story of India’s past.

The walled city of Old Delhi pulses with energy and colour with a hustle and bustle of the teeming bazaars and a maze of narrow lanes which twist and turn between tall leaning houses. The old city is full of the sounds, sights and aromas which will stimulate your senses.

Luyten’s landscaped New Delhi is well known for its magnificent parliament building, wide boulevards and green spaces and is the location of many fascinating historical and modern sights.

Delhi provides a perfect introduction to India before commencing your wildlife and cultural exploration of places further afield. 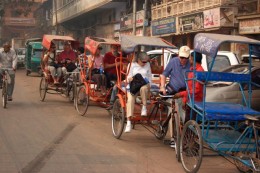 Rickshaw Ride – through the bazaars of the old city. Hire a cycle rickshaw to take you there and navigate the backstreets and lanes of one of the city’s most atmospheric, if not chaotic areas.

An opportunity to experience a unique and refreshing Old Delhi travel experience. On a sightseeing rickshaw tour of Old Delhi your senses will come alive as you will encounter the many captivating sights and sounds this amazing city has to offer. 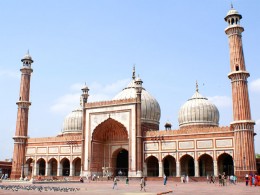 Jama Masjid – a huge mosque capable of accommodating 25000 worshippers for Friday prayers. The mosque is an architectural delight with tapering minarets and marble domes built between 1644 and 1658 by Emperor Shah Jahan.

The highly decorative mosque has three great gates, four towers and two 40 m-high minarets constructed of strips of red sandstone and white marble. Travellers can hire robes at the northern gate. This may be the only time you get to dress like a local without feeling like an outsider so make the most of it. 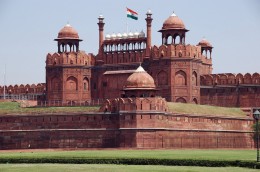 The Red Fort – The red sandstone walls of the massive Red Fort (Lal Qila) rise 33-m above the clamour of Old Delhi as a reminder of the magnificent power and pomp of the Mughal emperors. The walls, built in 1638, were designed to keep out invaders, later converted to a military barracks by the British colonial rulers.

An evening sound and light show re-creates events in India’s history connected with the fort. 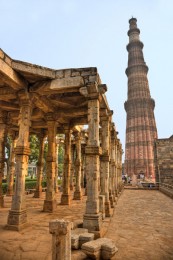 The Qutb Minar – a complex dominated by a thirteenth century tower nearly 73 metres high built by sultan Qutb-ud-din to celebrate his supremacy over the Hindu rulers of the city.

The tower has five distinct storeys, each marked by a projecting balcony and tapers from a 15 m diameter at the base to just 2.5 m at the top. The first three storeys are made of red sandstone; the fourth and fifth storeys are of marble and sandstone. At the foot of the tower is the Quwwat-ul-Islam Mosque, the first mosque to be built in India. 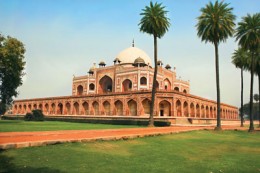 Humayun’s Tomb – a perfectly proportioned, white marble tomb said to be the template for the Taj Mahal and combining elements of Persian and Mughal architecture. This tomb, built in 1570, is of particular cultural significance as it was the first garden-tomb on the Indian subcontinent. It inspired several major architectural innovations, culminating in the construction of the Taj Mahal.

The tomb itself is in the centre of a large garden  with pools joined by channels. The mausoleum itself is on a high, wide, terraced platform with small arched cells along the sides. 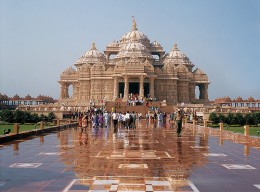 The Swaminarayan Akshardham complex was built in only five years. Heralded by the Guinness book of records as the World’s Largest Comprehensive Hindu Temple, the complex was inaugurated on 6 November, 2005.

All India Wildlife tours commencing in Delhi include a full day city tour featuring the above attractions, please view our tours page for more details.