Goa is India’s smallest and most prosperous state, an eclectic mixture, best known for its white sand beaches, Christian churches and the distinctive style of South Indian cuisine.

Goa was the original hippy backpacker destination, an idyllic paradise with a benign climate and easy going lifestyle. In recent years the state has been moving upmarket and the most popular beaches now boast five star hotels and are popular package tour destinations.

The religion, culture, cuisine and architecture here have all been influenced by the Portuguese colonial rule which make Goa a fascinating place to visit and a gentle introduction to the sub-continent for first timers.

Most visitors come to Goa for its wonderful beaches but there is more on offer including excellent bird watching.

Beaches – Goa has many excellent beaches some of which have experienced widespread development while others are still the small, laidback beach paradises that so attracted the first backpackers to this area. Some of the best beaches are found at Anjuna, Arambol and Mandrem on the North Coast and Colva and Palolem on the South Coast. 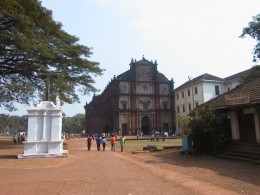 Old Goa – the old city that was Goa’s former capital between the 16th and 18th centuries once had a population greater than London. The sense of importance can be seen in the many magnificent cathedrals, churches and convents many of which are in an excellent state of repair and remain in use today. A trip to the old city is a welcome break from the lethargy that can be induced from too much time on the beach.