Khajuraho is famous for its unique and highly artistic, temple complex consisting mainly of Brahmin and one or two Jain temples. Of the 85 which were constructed by the Chandella Rulers who came to power in the tenth century, 22 still remain. The temples here are a Unesco World Heritage site and are amazingly well preserved.

Guests visiting Khajuraho who prefer to stay outside the town have the interesting option of staying in the Panna National Park and visiting the temple complex on a day trip, whilst enjoying some good wildlife viewing in the pretty Panna Tiger Reserve. 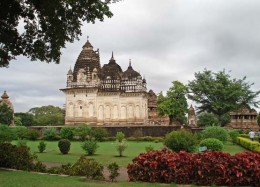 Khajuraho Temple Complex – this is the best preserved group and includes the Lakshmana Temple which has some of the raunchiest artwork and the Kandariya Mahadev temple which is the largest of the temples at Khajuraho and one of India’s most famous sacred temples.

The renowned Kandariya Mahadeva is in the Western group of sacred temples and with its visual and structural sophistication and splendour it will leave you spellbound. 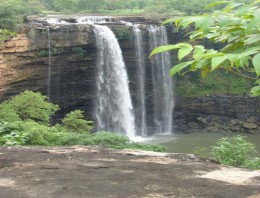 Panna National Park – a beautiful park, home to a few shy tigers but also many other wildlife species which are easily seen here.

The park is just 25 km from Khajuraho – a mere half an hour drive. It is extended over an area of 543 km2 along the banks of river Ken. The parks topography is a magnificent one of deep gorges and pristine forests. During the monsoons, the park is a lush green haven with cascading waterfalls.

Temples and Wildlife
Tigers and Culture