Mumbai, previously know as Bombay, is the commercial capital of India and has 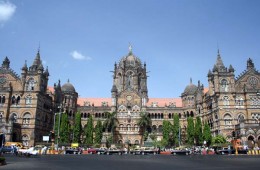 attracted migrants from all over India hoping to strike it rich. Cosmopolitan Mumbai is home to the Bollywood film industry, a centre of Indian fashion and the countries financial powerhouse and in common with most Indian mega-cities is a fascinating mixture of old and new which will enthral the visitor and stimulate the senses.

Originally Mumbai was built on seven islands which have since been joined by land reclamation projects to create todays single landmass which is connected to the mainland by bridges.

There is much in and around Mumbai to keep the visitor interested and a full day guided tour of the city will include the most interesting sights. 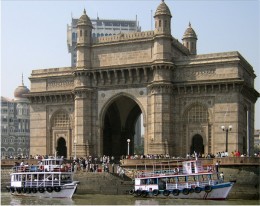 Gateway of India – built by the British but incorporating Gujarati styles of Islamic architecture.  The Gateway of India was constructed to celebrate the 1911 royal visit of King George V. The gateway is a great spot for locals and tourists to indulge a bit of people watching.

The Gateway was the ceremonial entrance to India for British governors and other prominent people. It would have been the first structure that visitors arriving by boat in Mumbai would have seen. 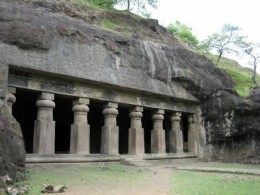 Elephanta Caves – the rock-cut Hindu temples at Elephanta Island six miles across Mumbai Harbour are a World Heritage Site and provide an insight into Hindu sculpture dating from 600 AD. The labyrinth of cave temples contain some very impressive carvings. The main Shiva dedicated temple is a fascinating composition of courtyards, halls, pillars and shrines. A six metre tall statue of Sadhashiva depicts the three faces of Shiva as the creator, preserver and destroyer of the universe his eyes closed in eternal contemplation.