The capital of  Himachal Pradesh state located at 7,116 feet (2,169 m) in the foothills of the Himalayas.

Shimla, then known as Simla, became the summer capital of British India in 1864, and was also the headquarters of the British army in India and many departments of the Government. The ideal climate of Shimla encouraged many British soldiers, merchants, and civil servants to migrate here each year to escape from the heat during summer. They were joined by many of the wives and daughters of the men who remained on the hot plains to the south.

The city still retains much of its colonial heritage in a variety of architecture, including, Command House, Gaiety Theatre, Town Hall, Scandal Point, Railway Board Building, Gortan Castle, Museum (Museum is closed on Monday and on all government holidays), Viceregal Lodge, and Christ Church on The Ridge. 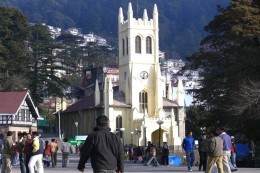 Christ Church – though Shimla is a Hindu majority city, the church has become one of the most recognizable landmarks of the city.

Built in the neo-Gothic style in 1857 to serve the largely Anglican British community in what was formerly called Simla, Christ Church is situated on The Ridge where is stands out as one of the prominent landmarks of Shimla. The silhouette of Christ Church is visible for miles around the vicinity of Shimla city. Christ Church remains one of the enduring legacies of the British Raj.

The Town Hall – the administrative centre for Shimla and the surrounding area. It houses many facilities such as a library and theatre, as well as offices—for police and military volunteers and for municipal administration. 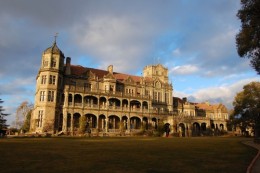 Rashtrapati Niwas – formerly “Viceregal Lodge”, was built in1888. It is located on the Observatory Hills of Shimla and was formerly the residence of the British Viceroy of India. It houses some of the most ancient articles and photographs going back to the times of the British rule in India. 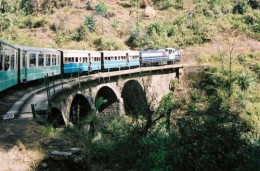 Kalka-Shimla Railway – is a narrow gauge railway travelling through a mostly mountainous route from Kalka to Shimla. It is known for dramatic views of the hills and surrounding villages and is designated as a UNESCO World Heritage Site.

The approximately 60 mile line was opened for traffic in 1903 to connect to the broad gauge Delhi-Kalka line which was opened a little earlier in 1891. Prior to construction of the railway, communication with the outside world was via village cart.