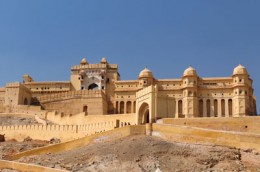 A circuit of culture visiting some of the most fascinating historical and religious sites in Northern India combined with a short safari in Ranthambore National Park with transfers by air and road.

This tour includes a full day’s guided sightseeing in Delhi visiting the old and new cities and the most important historical sites for which it is famous. A rickshaw tour of the old city is included.

Your next stop is Jaipur, a city of palaces with a fascinating history and the nearby Amber Fort where you will have an elephant ride to the top of the fort.

Ranthambore National Park home to a wide variety of wildlife is our next destination. The big cats here are relaxed and wander freely through the historical ruins scattered throughout the park.

Next comes Agra famous for the Taj Mahal built by the Emperor Shah Jahan as a memorial to his favourite wife Mumtaz, you will also visit Fatehpur Sikri and the Red Fort

The final leg of this tour takes you to Varanasi on the banks of the holy River Ganges, one of the oldest living cities in the world and an important Hindu and Buddhist pilgrimage site. A guided tour of the main sites of the city is included along with a sunrise boat trip on the Ganges.

Jaipur: The “Pink City” You can spend your first afternoon here at leisure before visiting the Amber Fort on the morning of day 4 to stroll through its grounds and structures. The present Amber Fort palace complex was commenced in 1592 under the reign of Raja Man Singh, commander of Akbar’s army and a member of the emperor’s inner circle of nine courtiers. There’s a short, yet steep ascent to reach the Amber Fort, you have the choice of reaching it on foot or why not enjoy a ride on an elephant to the top to see the magnificent views of Jaipur, Maotha lake and the original city walls. One of the fort’s most striking features is the Hall of Mirrors. When the palace was occupied by royalty, the hall could be lit at night by a single candle reflected in thousands of tiny, intricate mirrors.

The Amber Fort is not the only site worth visiting in Jaipur, your guided tour here will also include:
Jantar Mantar – This is the largest and the best preserved of the five observatories built by Jai Singh
City Palace – A delightful blend of Mughal and traditional Rajasthani architecture
Hawa Mahal – The ornamental facade of this “Palace of Winds” which is a prominent landmark in Jaipur.

Your day will finish with a walk through the great bazaars, a labyrinth of colourful alleys where artisans make puppets, bangles, and other local handicrafts. You will visit the jewellery market – Johari Bazaar, explore architecturally interesting havelis (mansions), and stop by bangle shops in Maniharonka Rasta and the flower sellers near Choti Chaupar.

Ranthambore National Park is one of the best parks to get up close and personal with tigers, the tigers here are more habituated to tourists than many of the other parks in India. Ranthambores Tigers are often seen during the day and are famous for hunting in full view of safari vehicles.

A huge fort, after which the park is named, towers over the park, atop a hill, and ruins of bygone eras are scattered all over the jungle, which give it a unique, wonderful and mixed flavour of nature, history and wildlife.

Starting with an afternoon jungle safari on day 5, each day you’ll enjoy jungle safari’s at dawn and dusk, the best times for viewing and photographing tigers, the rest of your time can be spent enjoying a leisurely swim, a relaxing walk or catching up on your sleep

Finding tigers requires acute hearing rather than a reliance on sight. The resident naturalists listen for the distinctive warning call from chital and monkeys when they sense a tiger approaching. The call alerts the wildlife and our guides to the tiger’s location. Tigers aren’t the only wildlife you’ll see here, leopard, striped hyena, jackals, sloth bear, macaques, langur monkeys, sambar and chital deer, and wild boar are also present.

After breakfast we’ll start our journey by private transfer to Agra stopping at Fatehpur Sikri: the red sandstone city, Emperor Akbar built as his capital and palace in the late 16th century. We’ll also visit the Bulund Darwaza, the largest gateway in the world. Fatehpur Sikri was established as a city in 1475 and its capture by Lodis led to the foundation of the Mughal Empire.

Agra, is home three UNESCO World Heritage Sites, the Taj Mahal, Agra Fort and Fatehpur Sikri.
Emporer Akbar also built Agra Fort the first red sandstone fort in North India which provides a fascinating fusion of Hindu and Islamic influences throughout its construction. It was here the Emperor Shah Jahan, builder of the Taj Mahal was imprisoned after being deposed by his son

Accommodation & Meals
1 night at ITC Mughal (Chamber of Emperor) or similar. (B)

Taj Mahal, one of the seven wonders of the modern world, is architecturally stunning and you’ll get the chance to see it at its best on a sunrise visit. Sunrise will give you the best light to take photos of this truly magnificent building. The Taj is a white marble memorial built by Emperor Shah Jahan for his beautiful wife Mumtaz Mahal. It took 22 years to be completed

After a well-earned breakfast we’ll transfer you to the airport for your flight to Khajuraho where you’ll get the chance to have an afternoon relaxing or exploring at your leisure.

A guided walking tour this morning will give you the chance to visit and learn about the UNESCO World Heritage site at Khajuraho, home to some magnificent Jain and Hindu temples. Known as the erotic temples, the intricate craftsmanship exhibits images of gods and goddesses, celestial maidens and dancers, animals and musicians, all frozen in stone, many in the act of courtship. The Eastern group of temples include the Parasvanath Temple – the only Jain temple surviving at Khajuraho, the Javeri Temple dedicated to Vishnu, and other temples are dedicated to Brahma, the Goddess Kali, the Visha Temple of Shiva, and the Bharatji Temple which has a beautiful image of 11 headed Vishnu.

In the afternoon you will check in for your flight to Varanasi and get a chance to relax before an evening visit to Dashaswamedh to see the glittering aarti ceremony of the holy river Ganges. During the ceremony huge lamps are set ablaze and the priest holds forth the lamp as the crowds chant hymns. You will be driven to a place called Benia bagh and from there you’ll walk through the crowded local market famous for spices, local shops, cloths and daily vendors selling fruits, pickles, and vegetables on hand pulled carts.

On day 11 an early start will see you drive back to Dashaswamedh Ghat to take a boat ride on the sacred river Ganges, where, at sunrise the cremation Ghats will unfold before you as you witness the living traditions of one of the world’s oldest religions. Heading back to the hotel you’ll make a stop at Kashi Vishwanath.

That all happens before breakfast, so once you’ve had a chance to re-energise you’ll visit some more of Varanasi’s amazing sights. Mother India Temple, Baneras Hindu University, Durga temple and Sarnath. Sarnath is one of the most sacred places of buddhism and where Lord Buddha gave his first sermon after attaining enlightenment. After his enlightenment in Bodhgaya, the Buddha went to Sarnath seeking his five former companions. He found them, taught them what he had learned, and they also became enlightened. This event is referred to as “the turning of the wheel of the Dharma” and also marks the founding of the Sangha, or the community of monks. Ask your guide to share the legends of this sacred place.

After breakfast you’ll fly back to Delhi for your last night in this truly amazing country.

On day 13 we bid you a fond farewell and transfer you to the airport to board the flight for your onward journey.