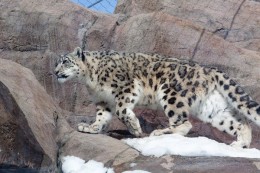 The park is home to a number of species of endangered mammals but of principal interest to the wildlife enthusiast is the presence of a viable population of the very beautiful, elusive and highly endangered snow leopard. A visit to Hemis National Park probably provides your only realistic chance of spotting one of these rare cats in the wild. The snow leopard is the apex predator in this region and survives mainly on a diet of the three species of sheep that live here argali (great Tibetan sheep), bharal (blue sheep), shapu (ladakhi urial), and livestock.

This magnificent national park is known for its scenic beauty, with some very high mountain peaks and alpine forests. The boundaries of the park are marked by the confluence of the Indus and Zanskar Rivers.

Trekking and hiking with experienced local guides, there are no metalled roads and many tracks are impassable at certain times of year.

Open all year round but best time to see snow leopards is late winter from January to early April.
Chance of seeing a snow leopard – good
Location – Jammu and Kashmir – Ladakh district

To see snow leopards this area needs to be visited on an organised group tour, there are a few set departures each winter please contact us for details or chat with one of our specialist consultants.
Tel +44 (0)845 0545884