Kanha is one of India’s larger parks covering an area of 940 square kilometres as its core zone and surrounded by a buffer zone of of further 1009 square kilometres. The reserve provides an excellent habitat for many mammals and bird species and is one of the few parks where most visitors staying for a few days will get to see some tigers. The lowland forest is a mixture of sal and other mixed forest trees, interspersed with meadows. The highland forests are tropical, moist dry deciduous type with bamboo on the slopes. 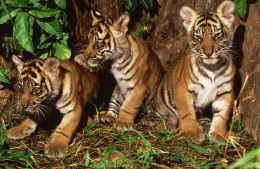 Kanha Tiger Reserve has many meadows formed by the removal of local people to make way for the park and these open grassland areas are much favoured by tigers. The park is also home to leopards, sloth bears and dhole. Very rarely seen is the Indian wolf which lives in the far east of the park. The most abundant prey species for the large predators is the chital and the larger sambar deer which is an important prey base for the tiger.

A zonal system is in operation for game drives. Zones are allocated to visitors in advance and guests can drive anywhere within their allocated zone but may not cross into other zones. For wildlife enthusiasts this park is easily combined in a circuit with the nearby and equally stunning Bandhavgarh and Pench Reserves.

Game viewing is by 4×4 safari jeeps and is also possible on elephant back.

Open 16th October to 30th June, best from November to May.

Chance of seeing a tiger- excellent