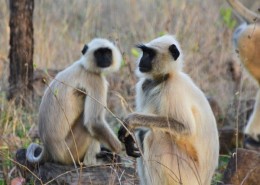 Panna National Park was originally a hunting reserve, owned by the Maharaja of Panna, the boundary of the 540 sq. km park is marked by the broad and rocky River Ken which flows through the Vindhya Range in Madhya Pradesh on route to the Ganges.

The park was declared a tiger reserve under project tiger in 1994 and was initially a great success story, unfortunately corruption amongst park officials led to a rapid increase in poaching and there were no tigers left by 2009. Tigers have now been re-introduced and have bred successfully, so are now, once again the apex predator, roaming this beautiful park, although numbers remain very small.

The park is deeply forested with dry deciduous varieties such as teak, acacia and sal and is a very scenic park. The dense cover provides excellent habitat for nilgai, chinkara, sambar and chital as well as more elusive species such as the sloth bear, wolf and the smaller cats. Panna has a very good population of leopards which have flourished while the tiger population was decimated, there is a good chance of spotting them here. The Ken River is also home to both of India’s crocodiles, the mugger and the fish eating gharial, for which there is a separate breeding sanctuary.

The park is an excellent birding destination and seven of the eight species of vulture found in India are believed to be resident here.

For clients wishing to enhance their chances of tiger viewing this park is best combined with one or both of the excellent tiger reserves at Kanha and Bandhavgarh which are a five hour drive away.

Activities include game drives, elephant-back safaris and boat safaris on the Ken River. village visits and guided walks are possible in the buffer zone.