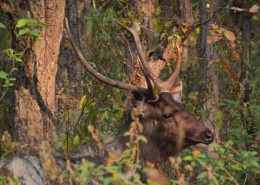 Ranthambore is one of the largest national parks in Northern India and was originally the private hunting reserve of the Maharaja of Jaipur. It is situated in Sawai Madhopur district of South Eastern Rajasthan and became a “Project Tiger Reserve” in 1973.

The park is named after the historic Ranthambore fortress, which lies within the national park. This scenic park and its fortress has been featured in many wildlife documentaries.

The park lies at the edge of a plateau and is bounded to the north by the Banas River and to the south by the Chambal River. There are several man made lakes in the park, full of crocodiles and adding to what is already a very scenic back drop. Both tigers and crocodiles like to hunt along the lake shores where the prey species that like to graze on the rich grass are found in good numbers.

Ranthambore is famous for its tigers and is one of the best places in India to see these majestic predators in the wild. Tigers here are more used to safari vehicles than elsewhere and as a result, less shy, making them much more visible to visitors.

Unfortunately there has been considerable pressure from human encroachment in this area, which is an oasis in a heavily populated area. Several tigers have been poached for their skins whilst villagers have also resorted to poisoning to protect their livestock which is frequently predated by tigers.

Ranthambore is very conveniently located for guests taking a “Golden Triangle” cultural tour and as a result it is a very busy park.

In common with other popular parks, a zonal system, combined with a route system, has been introduced to reduce the stress to wildlife caused by too many visitors. Some routes and zones have very few tigers.

Open 1st October to 30th June, most comfortable in winter between November and March.
Chance of seeing a tiger – good
Location – Rajasthan