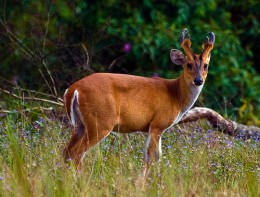 Tadoba Andhari is the largest national park in Maharashtra formed when the Tadoba National Park and the Andhari Wildlife Reserve were merged in 1993 to form the Tadoba Andhari Tiger Reserve under the auspices of “Project Tiger”.

The reserve is predominantly teak and bamboo forest with the Tadoba lake lying to the south west, providing a buffer between the reserve and the farmed areas beyond. The reserve is bounded on the northern and the western side by densely forested hills. Thick forests are relieved by smooth meadows favoured by tigers and their prey.

This is one of the most interesting parks in the country, being off the beaten track there are few visitors, and wildlife, including tigers and other endangered species such as honey badger, leopard and leopard cat have flourished here.

In recent years some good tourist accommodation has grown up around the park and with rapidly improving sightings of the big cats the park has become increasingly popular.

Unusually for an Indian park, Tadoba Andhari National Park is partially open throughout the monsoon season, giving visitors the option of visiting the reserve at a very active time for wildlife and plants. Many animals choose to have their young during this period.

The parks location is convenient to be included in a circuit with other popular Central Indian tiger reserves such as Pench, Bandhavgarh or Kanha.

Fully open 1st October to 15th July. Partially open rest of the year, including during the monsoon. Closed on Tuesdays.
Optimum time for visiting is February to May.
Chance of seeing a tiger – excellent
Location – Maharashtra