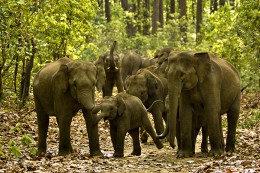 This two centre safari tour provides guests with the chance to see a wide variety of India’s major species including the “Big Four” – tiger, sloth bear, elephant and rhino.

Following a city tour of Delhi you will fly to Kanha National Park in Central India. Kanha has a good population of tigers. Most visitors to the park will get to see some tigers if staying for two or three days, along with sloth bears, another member of the “Big Four”.

You will have a two night stop in Kolkata including a guided sightseeing tour of the former British colonial capital city.

The second leg of your tour visits the excellent and much less visited Kaziranga National Park, in the north eastern state of Assam. Kaziranga is home to almost 2000, easily visible, Indian one-horned rhinoceros, representing most of the world’s remaining population. The park is also home to wild Asian elephant and water buffalo. Tigers are also fairly numerous but are difficult to spot in the long grass and thick vegetation. Your stay here includes a morning elephant-back safari.

DAY 1-2 DELHI
On your arrival at the airport in Delhi you will be met and transferred to your hotel, then it’s up to you, spend the rest of your day exploring or relaxing before devoting day 2 to soaking up the fascinating sights and sounds of Delhi on our full day tour.

Delhi’s mix of old and new is sure to awaken the senses. Emerge yourself in Old Delhi and find the energy and color of this vibrant walled city filled with the hustle and bustle of bazaars and street life, along the narrow lanes which twist and turn between tall, leaning houses. Contrast old with new as you enter, cosmopolitan New Delhi, Luyten’s landscaped city. It is known for its formal parks, the Rashtrapati Bhawan (the official residence of the President of India designed by Sir Edwin Lutyen) and the India Gate. Visit the Qutab Minar, the 72.5 m high tower dating back to 13th century and Humanyun’s Tomb, built in the 16th century and architecturally the fore runner of the Taj Mahal.

Kanha National Park is considered one of the finest protected wildlife areas in the world designed to save two endangered species, tiger and barasingha, but don’t let that take away from the other 40+ species of mammals found in the park that will make Kanha such an unforgettable experience. You may see leopard and wild dog alongside tigers, gaur and chital, porcupine and mongoose and let’s not forget the scavengers like hyena and jackal. With all this fantastic wildlife to see you’ll never want to leave.

You will take a morning and afternoon jungle safari in the park. The rest of the day can be spent relaxing at the lodge, taking a nature walk, visiting a nearby village/school or maybe enjoy a cooking demonstration highlighting the fabulous local cuisine.

DAY 6-7 KOLKATA
After a leisurely breakfast you will transfer by road to Raipur where you will check in for your flight to Kolkata.

Kolkata, formerly known as Calcutta in English, is the capital of the Indian state of West Bengal and is located on the east bank of the River Hooghly. Kolkatta was a colonial city developed initially by the East India Company and then by the British Empire. Kolkata was the capital of the British Indian Empire until 1911 when the capital was relocated to Delhi. The city is known for its revolutionary history, ranging from the Indian struggle for independence to the leftist Naxalite and trade-union movements. Labelled the “Cultural Capital of India”, “The City of Processions”, “The City of Palaces”, and the “City of Joy”, Kolkata has also been home to a long list of prominent individuals including, possibly the most famous resident of all, Mother Teresa. Problems related to rapid urbanisation plagued Kolkata from the 1930s and the city remains a classic example of the urbanisation challenges faced by developing nations.

On day 7 you’ll be able to absorb yourself in India’s second largest city as our guide takes you on a sightseeing tour of the metropolis, including the Victoria Memorial, the Indian Museum, the Jain Temple and the Howrah bridge. Visit the Marble Palace mansion), the Jain Temple, Dakshineswar Hindu Temple, Belur Math (a Buddhist monastery), the Victoria Memorial, Dalhousie Square and the Nakhoda Mosque. For a spectacular view of the city, climb the Octherlony Monument.

DAY 8-11 KAZIRANGA NATIONAL PARK
After breakfast, you will be transferred to the airport to board a flight for Jorhat from where you will transfer by road to Kaziranga National Park, famous as one of the last remaining strongholds of the Indian Rhinoceros. On arrival you can spend the afternoon re-energising ahead of 3 days of fantastic wildlife viewing.

Kaziranga National Park, Assam-The National Park covers around 430 sq kms and is bordered on the north by the Brahmaputra River and on the south by the Karbi Anglong hills. The largest number of one-horned rhinoceros in the world roam its swamps, grasslands and forest. It is home to a wide variety of other animals and birds, and the open vistas make it relatively easy to see the huge variety of wildlife that makes Kaziranga their home.

During  your four days at Kaziranga you’ll enjoy a morning and afternoon safari each day including the chance to board an elephant for an early morning safari on one day. The rest of your game drives will be by private 4×4 open jeep.

DAYS 12-13 DELHI
After breakfast you will transfer to Guwahati airport to board your flight to Delhi and onwards to your hotel.

On day 13 we bid you a fond farewell and transfer you to the airport to board the flight for your onward journey.

*Currently there is no camera fee either still or video for amateur photography at Satpura, Pench, Kanha & Bandhavgargh National parks.