India has over one hundred national parks which include a number of tiger reserves protected under auspices of “Project Tiger”. The project was set up in 1973 to protect the last remaining viable populations of wild Bengal tigers. There are thought to be less than 2000 remaining and sadly some of these reserves have very few or in some cases, no tigers left.

National parks and tiger reserves cover a wide range of India’s varied habitats, from the steamy jungles of South India and the North East to the Himalayan mountain regions of the North. Most are scenically very beautiful and boast a healthy cross section of India’s varied wildlife. 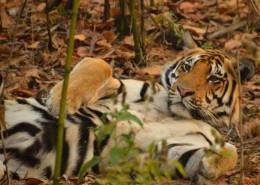 If you want a realistic chance to see a tiger you will need to be prepared to stay for at least three nights in one of the premier tiger reserves: Tadoba Andhari, Bandavgarh and Kanha in Central India, Ranthambore in Rajasthan and Corbett in Northern India offer the best chance of seeing tigers on a relatively short visit. Kaziranga in Assam, best known for its wild elephants and one-horned rhinos also has a high density of tigers, but they can be difficult to spot in the long grass and hilly terrain.

An indication of what fauna can be found in each park is given on the individual reserve pages along with an indication of your chances of seeing a tiger.

Most Indian parks comprise a core zone surrounded by a buffer zone. Under “Project Tiger”, specially constituted tiger reserves have been set up, which are sought to be replicas of the various bio-geographical regions of the country. The core areas of the reserves are made free of any human settlement, while the buffer areas are dedicated to ‘conservation oriented’ land use.

Only part of the core zone is open to the public usually around 20 per cent with the remainder being closed to visitors and undisturbed. 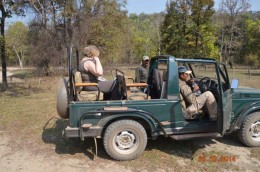 The principal activity is game drives in open 4×4 safari vehicles, some parks also offer various forms of elephant-back safari. Other activities which may be offered include guided walks and night drives which are limited to the buffer zones. Boat safaris, canoeing and fishing are also possible in some parks. See the individual park page for an indication of activities that are possible.

Each tiger reserve has its own rules and regulations regarding visitors, dependent on the location and climate. As a general rule the main season for visitors is between mid-October and April with most parks being closed during the mid- summer and monsoon months.

The most popular parks with good tiger populations operate a zonal system for visitors within the core zone. Visitors are allocated a specific zone in which they can game drive for a morning or afternoon drive and they are not permitted outside the zone. They may also in some parks be allocated a route, either clockwise or anticlockwise. This helps to control the number of visitors at any particular sighting and reduces stress to the wildlife which was becoming a problem due to the volume of visitors. New rules were introduced in 2012 to tackle this issue including halving the number of daily visitors permitted. Although the benefits are positive, the zonal system does make sightings more difficult, especially as no off-road driving is permitted.

Mobile phones and radios are also not permitted so the location of sightings cannot be passed from guide to guide via this method.

Most parks are closed during the middle of the day and also close for a half or one day per week.