Formerly known as Cochin, the vibrant and colourful city of Kochi is located on the south west coast and the gateway to the very scenic Kerala state.

With its strategic location, Kochi has been drawing traders and explorers to its shores for over 600 years. Nowhere else in India could you find such an intriguing mix: giant fishing nets from China, a 400-year-old synagogue, ancient mosques, Portuguese houses and the crumbling remains of the British Raj. The result is an unlikely blend of medieval Portugal, Holland and an English village grafted onto the tropical Malabar Coast.

This city attracts many tourists from around the world and is a wonderfully atmospheric place to spend a day or two exploring. 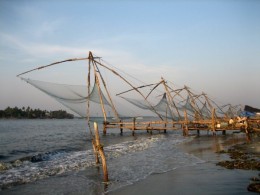 Chinese Fishing Nets – the Chinese fishing nets were reputedly brought to the Malabar Coast by traders from the court of Kublai Khan and are located on the north shore of Fort Cochin. The huge cantilevered contraptions operate with a combination of levers and weights and require four people to operate them. The Chinese fishing nets are probably the single most famous image of Kerala. Known in Malayalam as cheena vala, they can also be seen throughout the backwaters further south. The nets, which are suspended from poles and operated by levers and weights, require at least four men to control them and the catches seem remarkably small. Watching the teams of fisherman operating their nets as they have for centuries is an unusual and interesting travel experience as well as a great photo opportunity. 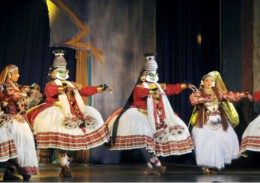 Kathkali Dance Theatre – Kochi is the only city in Kerala where you are guaranteed the chance to see live Kathakali, the state’s unique form of ritualized theatre. Kethkali dance shows take place on most evenings in both authentic temple settings as well as in venues intended specifically for the purpose. These mesmerizing dance dramas – depicting the struggles of gods and demons are an unmissable feature of Kochi’s cultural life. 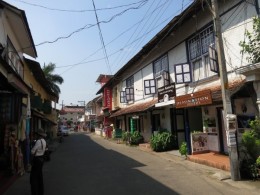 Old City Tour – the areas of Matancherry and Fort Cochin provide a fascinating insight into the history of Kochi and the Malabar Coast. A tour here can be by rickshaw, bicycle or on foot. Do not miss Bolghatty Palace built by the Dutch in 1744 and originally the governor’s residence. Jew Town, a bustling port area and centre of the Kochi spice trade. Scores of small firms huddle together in old, dilapidated buildings and the air is filled with the aroma of ginger, cardamom, cumin, turmeric and cloves. These days, the lanes right around the Dutch Palace and the synagogue are filled with antique and tourist curio shops rather than pungent spices.