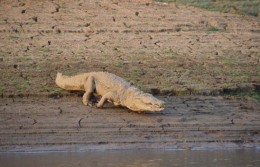 Named after the famous hunter, naturalist and author Jim Corbett who played a key role in its establishment, Corbett was the first national park in India. Corbett is located in the foothills of the Himalayas and has very diverse flora and fauna.

The park is divided into three distinct geographical areas, with hilly areas of deciduous mixed forests, as well as low lying grassland with ravines and vast dense forests of sal trees* The Ramganga River bisects the park. Due to its location Corbett is the only Indian national park where the Himalayan black bear, Himalayan palm civet and the Himalayan ghoral are found, but they are rarely seen.

Two of the most interesting reptiles are the gharial (fish eating crocodile) and the mugger crocodile, found on the Ramganga River and reservoir. Corbett Tiger Reserve has a significant tiger population, thought to be around two hundred, but due to the dense vegetation they are difficult to spot. The birding in this park is also exceptionally good.

In common with other parks the tourist area is divided into zones all with their own exclusive entry gate.

4 x 4 jeep safaris and elephant back safaris in the Dhikhala and Birjani zones.