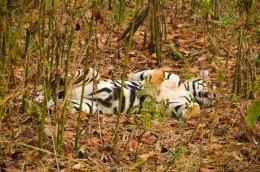 Pench National Park is famous as the inspiration and setting for Rudyard Kiplings classic novel “Jungle Book”. The park was also the location for the BBC wildlife documentary “Spy in the Jungle”.

The park is named after the river which bisects the park and effectively cuts it in two for most of the year. Most of the lodges are on the eastern side of the park, so, guests staying on the western side will see far few people and most likely have the sector of the park west of the river to themselves.

Since 1992 Pench has been included under the umbrella of Project Tiger as the 19th Project Tiger reserve and is one of the best managed reserves in India.

The Pench Tiger Reserve is a dry deciduous forest of predominantly teak trees which provide an excellent home for a wide variety of species and the forests here are literally teeming with wildlife.

Pench is the least well known of Central India’s primary tiger reserves and sees far fewer visitors than its nearby sister parks of Kanha and Bandhavgarh. There are a good number of tigers inthe reserve and although they can be more difficult to spot there is still an good chance of seeing these big cats here. A circuit of these parks is a good option for keen wildlife enthusiasts. Pench also has a reputation as a good place for spotting dholes (wild dog).

Mainly game drives in 4×4 jeep type vehicles. Elephant-back safaris are also possible. Some night drives are being introduced in the buffer zone.