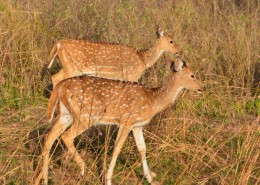 Your tour is a circuit of some of the most varied but less well known national parks in Central India including the teak forests of Pench, the mixed forest at Satpura and the bamboo forests of Tadoba much loved by tigers.

Your exciting holiday starts with a guided tour of Delhi before travelling to Satpura National Park. This stunningly beautiful park is one of the best places in India to see sloth bears and also home to many leopards and some large crocodiles. This is one of very few places where guided walks and night drives are possible. Elephant-back safaris (included), boat safaris and canoeing also feature here.

Your next destination is Pench National Park, this little known park is teeming with wildlife both large and small and is a good place to see dholes (wild dogs) as well as most of Central India’s other major species.

Your final destination is Tadoba-Andhari National Park, this almost unknown national park is one of the best places for seeing Bengal tigers.

Accommodation & Meals
2 nights at The Claridges (Deluxe Room) . (B)*

Today you will transfer to Satpura National Park, boarding an early morning flight to Bhopal and finishing the trip by road.

Satpura National Park is one of Central India’s least visited parks. Here you will experience the feeling of being one of the first visitors to explore the dense sal and teak forests in search of sloth bears, gaur and leopard. The park is located in Madhya Pradesh and part of the Panchmarchi Biosphere Reserve that includes Bori wildlife sanctuary and Panchmarhi wildlife sanctuary. The park’s terrain is rugged with an elevation reaching 1,352m and consisting of sandstone peaks, narrow gorges, ravines, waterfalls, streams and dense forests. Here you might see sloth bears, black buck, porcupine and the rare Indian giant squirrel. Satpura may not be the best park to see the elusive Bengal tiger but the opportunity to join a walking safari means you can get close to nature and experience the jungle in what will be an exciting experience

After enjoying your final game drive in Satpura National Park transfer by road to Pench where the BBC filmed David Attenborough’s acclaimed documentary, “Tiger: Spy in the Jungle”

Pench National Park was the inspiration for Kipling’s classic novel, “The Jungle Book”. Pench is located in the Central Indian state of Madhya Pradesh and is the 19th Project Tiger Reserve established in 1992. It’s one of the best-kept secrets among wildlife enthusiasts who have long been acquainted with and entranced by its variety of flora and fauna. The area is dominated by open canopies of mixed forest, predominantly teak and open grassy patches. No wonder it boasts the highest density of herbivores in any Indian park including chital (spotted deer) and sambar favourite prey of the mighty tiger.

You can also expect to see a large diversity of other wildlife, including leopard, jungle cat, dhole (wild dog), sloth Bear, wild boar, mongoose, and gaur.

DAYS 8-10 TADOBA NATIONAL PARK
A road transfer to Tadoba National Park and an afternoon of rest and relaxation gives you the perfect opportunity to recharge your batteries before starting your quest to find the mighty tiger in this exciting but lesser known park.

Tadoba Andheri Tiger Reserve is Maharashtra’s oldest and largest National Park and one of India’s 41 tiger reserves. Here you’ll search for one of Tadoba’s 65 tigers as well as leopard, sloth bear, gaur, nilgai, dhole, striped hyena, small Indian civet, jungle cat, sambar, barking deer, chital, and chausingha all accompanied by a resident naturalist and forest guide in 4x 4 Jeep. Don’t forget to ask your guide about the God Taru. Legend holds that Taru was a village chief who was killed in a mythological encounter with a tiger. A shrine dedicated to the God Taru now exists beneath a huge tree, on the banks of the Tadoba Lake.

After breakfast we’ll transfer you to Nagpur airport to board your flight to Delhi where you will be met and transferred to your hotel.

On day 12 we bid you a fond farewell and transfer you to the airport to board the flight for your onward journey.

*Currently there is no camera fee either still or video for amateur photography at both Satpura and Pench National Parks.