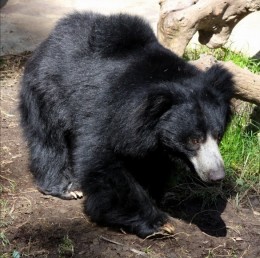 Satpura is a stunning land of rugged hills and mountains with sandstone peaks, narrow water filled gorges, deep ravines, dense sal* and mixed forests, and thanks to the Tewa Lake bordering the park, there are also some delightful coves and bays, which  can be explored by kayak or motor boat. Large mugger crocodiles can often be spotted basking on the shore.

The tiger reserve only opened to the public in 2009 and there are still a number of villages within the park boundary whose residents have been reluctant to move out.

Satpura National Park, being part of a rich Central Indian forest ecosystem, is rich in biodiversity. The wildlife includes tiger, which are rather reclusive here, being unused to safari vehicles and having been hunted in the past. The park is best known for its sloth bears, which are quite common , and is also a good place to spot leopards and rare Malabar giant squirrels.

The park sees relatively few visitors, which is a shame, as it is very well managed and offers much more than tigers. In fact it is ideal in combination with one of Central India’s other parks such as Kanha, Pench or Bandhavgarh. You are permitted to drive anywhere in the areas open to the public, there is no zonal system in operation at present and you will see very few other vehicles on your game drives.

Access to the park is by boat across the lake and only park vehicles are allowed to game drive in the park, there are only twelve vehicles in the reserve at any one time ensuring a very low visitor density. Local lodges have donated vehicles to the park which gives them priority when booking.

Satpura is one of the few parks in India offering activities such as night drives in the buffer zone, guided walks, canoeing and motor boat safaris.

There is a wider range of activities for the visitor than in most other Indian parks. These include 4×4 game drives (can be full day trips in the winter months), night drives in the buffer zone, guided walks in the park, elephant-back safaris, kayaking and boat safaris on the lake.