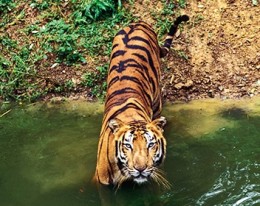 The Kipling’s India tour is perfect for wildlife enthusiasts visiting the principal tiger reserves of Central India, the setting for Kipling’s novel “The Jungle Book”.

Following a city tour of Delhi we visit Satpura National Park. This little known and stunningly beautiful park is one of the best places in India to see sloth bears and also home to many leopards and some large crocodiles. This is one of very few places where guided walks and night drives are possible in addition to elephant-back safaris, boat safaris and canoeing.

We continue our trip via Pench National Park, the setting for The Jungle Book, and the superb tiger reserves of Kanha and Bandhavgarh.

Today you will transfer to Satpura National Park, boarding an early morning flight to Bhopal and finishing the trip by road.

Satpura National Park is one of Central India’s least visited parks. Here you will experience the feeling of being one of the first visitors to explore the dense sal and teak forests in search of sloth bears, gaur and leopard. The park is located in Madhya Pradesh and part of the Panchmarchi Biosphere Reserve that includes Bori wildlife sanctuary and Panchmarhi wildlife sanctuary. The park’s terrain is rugged with an elevation reaching 1,352m and consisting of sandstone peaks, narrow gorges, ravines, waterfalls, streams and dense forests. Here you might see sloth bears, black buck, porcupine and the rare Indian giant squirrel. Satpura may not be the best park to see the elusive Bengal tiger but the opportunity to join a walking safari means you can get close to nature and experience the jungle in what will be an exciting experience

After enjoying your final game drive in Satpura National Park transfer by road to Pench where the BBC filmed David Attenborough’s acclaimed documentary, “Tiger: Spy in the Jungle”

Pench National Park was the inspiration for Kipling’s classic novel, “The Jungle Book”. Pench is located in the Central Indian state of Madhya Pradesh and is the 19th Project Tiger Reserve established in 1992. It’s one of the best-kept secrets among wildlife enthusiasts who have long been acquainted with and entranced by its variety of flora and fauna. The area is dominated by open canopies of mixed forest, predominantly teak and open grassy patches. No wonder it boasts the highest density of herbivores in any Indian park including chital (spotted deer) and sambar favourite prey of the mighty tiger.

You can also expect to see a large diversity of other wildlife, including leopard, jungle cat, dhole (wild dog), sloth Bear, wild boar, mongoose, and gaur.

After a morning safari in Pench we’ll take a drive through rural countryside and colourful towns and villages on our way to Kanha National Park. On the way we’ll make a stop at a city sacred to the Gond tribes, the sleepy Mandla where the Narmada river, second only in holiness to the Ganges, is the centre of activity.

Kanha National Park is considered one of the finest protected wildlife areas in the world created to save two endangered species, tiger and barasingha, but don’t let that take away from the other 40+ species of mammals found in the park which make Kanha an unforgettable experience. Expect to see leopard and wild dogs alongside tigers, gaur and chital, porcupine and mongoose and of course scavengers like hyena and jackal. With all this fantastic wildlife to see you’ll never want to leave.

Each day enjoy misty mornings and the sound of birds as you get ready for your dawn jungle safari and a picnic breakfast amongst the wildlife. Then spend time relaxing at the lodge, taking a nature walk, visiting a nearby village/school or getting in cooking demonstration on fabulous local food. Later in the day, you’ll get the chance for another jungle safari

After enjoying your final game drive in Kanha National Park you’ll make the drive to Bandhavargarh, home to the one of the highest densities of tiger on the Subcontinent.

Bandharvargh National Park was once a Shikargah, or game preserve, of the Marharaja but became a national park in 1968. It’s also the site where the famous white tigers of Rewa were discovered. Unfortunately in the last 100 years the white tiger has only been spotted wild in India on a handful of occasions. In contrast Bandhavargh boasts one of the highest densities of Bengal Tigers. There are in the region of 50 tigers here and the chances of finding one are good.

Set amongst The Vindhya Hills in Madhya Pradesh, Bandhavgarh is one of India’s smallest National Parks but it’s teaming with wildlife. There are at least 150 species of birds in the park, along with other mammals such as sloth bear, langur monkeys, wild boar, mongoose, chital, sambar and barking deer.
Wildlife isn’t the only draw to this park, the Bandhavgarh Fort, offers breath taking views, a 35 ft reclining statue of Lord Vishnu and the 10th century rock images of the incarnation of the Lord Vishnu. Legend has it that this fort was made by Lord Rama for his younger brother Laxman.

As with Kanha you’ll get the chance to do a morning and afternoon jungle safari. In the winter months morning safaris require warm clothes. We provide blankets and sometimes even a hot water bottle to help keep the wind chill at bay.
An optional tour to the fort is available.

DAYS 15-16 DELHI
After breakfast we’ll transfer you to Jabalpur airport to board your flight to Delhi and onwards to your hotel.

On day 16 we bid you a fond farewell and transfer you to the airport to board the flight for your onward journey.

*Currently there is no camera fee either still or video for amateur photography at Satpura, Pench, Kanha & Bandhavgargh National Parks.